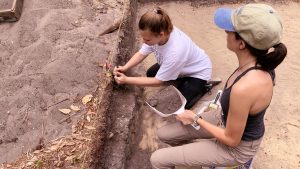 University of North Florida Professor Keith Ashley and his students are excavating at Big Talbot Island in  the Timucuan Ecological and Historic Preserve with the goal of finding evidence of an ancient Native American village. Not much is known about the place called Sarabay, which Europeans documented in the 1500s.

The damage hurricanes Matthew and Irma did to many First Coast businesses, homes and roadways has been well documented. However, these storms also threatened the safety of historical artifacts in the Jacksonville area.
Read more about UNF Helps National Park Service Assess Jacksonville Archaeological Storm Damage

SHADOWS OF THE PAST:
MYSTERIES FROM FLORIDA HISTORY

Florida's rich and diverse history is well known. But there are some stories from the past that remain a mystery. Will these mysteries of Florida history ever be solved or are the answers to these stories lost in the shadows of the past?

People from as far away as the American Midwest visited Florida long before Europeans arrived.
The ancient Maya may have come here, too.

Times Union – UNF team digs through the trash of ‘fisher-hunter-gatherers’ who lived in Jacksonville 2,500 years ago

inside UNF – Students unearth the past during summer field school

Florida Times-Union, Matt Soergel, June 11, 2018 – UNF team digs through the trash of ‘fisher-hunter-gatherers’ who lived in Jacksonville 2,500 years ago

inside UNF, by Isabel Pease, July 2018 — Students unearth the past during summer field school

First Coast Magazine – Dig Into the First Coast: How to become a volunteer archeologist

Florida Times-Union, by Meredith Rutland — Class Finds Clues to the Region's Past; Archaeologists and UNF Students Studying a Dig at Big Talbot Island

UNF Spinnaker, Alex Wilson, June 11, 2014 — Archaeology students dig up a little of the past at Big Talbot Island

Jacksonville.com, May 2013 – Amid mounds of oyster shells, looking for clues to the lives of ancient peoples

Jacksonville.com, June 2013 – Many clues, but little evidence: The search for Fort Caroline goes on

WJCT Documentary, available as DVD – Shadows of the Past

Spinnaker, May 2014 –Archaeology Professor to lecture on Northeast Florida’s history dating back to 1000 AD

Jacksonville.com, by Matt Soergel, June 14, 2013 – Many clues, but little evidence: The search for Fort Caroline goes on