This long-term, problem-oriented study focuses on the Mocama-speaking Timucua Indians who lived along the Atlantic coast of northern Florida at the time on European arrival (A.D. 1562). The project combines archaeological survey, excavation, laboratory analysis, and archival research. It is committed to the search for Mocama villages in an effort to reconstruct the 16th century social landscape of northeastern Florida. Beyond locating villages and exploring their physical layouts, the project is designed to research the social history and culture of the region’s 16th and 17th century Native Americans in the face of European contact, colonization, and missionization.

View maps of the Mocama landscape.

What was their Name?

When the Spaniard Hernando de Soto moved north through the middle of northern peninsular Florida in 1539, he encountered Timucua-speakers. When the Frenchman Jean Ribault waded ashore along the Atlantic coast near Jacksonville in 1562, he too met with Timucua-speakers.  Europeans would soon find out that Timucua-speakers covered a broad area, in fact, some 19,000 square miles of northern peninsular Florida and southern Georgia.  They also learned first-hand that the Timucua were splintered into chiefdoms actively engaged in mutually hostile rivalries and peaceful alliances. The earliest European chroniclers, however, offerd no single name for the various Timucua-speakers they encountered.  And it is unclear if such an all-encompassing name even existed among the natives of Florida. 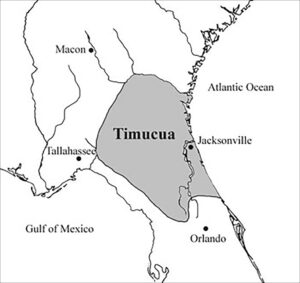 So then, who were the natives living in Jacksonville when the French arrived in 1562?  We do not know what they called themselves. What we do know is that the first verbal exchanges between Europeans and native Floridians involved speakers of radically different languages. Misunderstandings were inevitable.  Early French accounts tell us that the dominant chief in the Jacksonville area was Saturiwa, whose village may have been located in the Mayport area.  The same documents also mention a village (or chief) named Thimagona living west of the St. Johns River in Putnam County.  We never see reference to Saturiwa (as a person, place, or people) in French or Spanish documents after 1568. Later, after extended contact, the Spanish used the word Timuqua (now Timucua, and likely based on the word Thimagona) to refer to the language spoken by the natives of northern peninsular Florida and southeastern Georgia.

The word Timucua is used by modern scholars as a blanket term for all contact‑era native groups of northern peninsular Florida and parts of southern Georgia who shared a common language—Timuqua.   Based on the seventeenth-century writings of Fray Francisco Pareja, stationed at San Juan del Puerto on modern Fort George Island, we know that there were at least eleven dialects of the Timucua language.  Mocama, which translates to “the sea or ocean,” was the Atlantic coastal or maritime dialect spoken by the Timucua of the Jacksonville area.  It was distinct from the saltwater (Agua Salada) dialect spoken by the coastal Timucua to the south in the vicinity of St. Augustine.

During early mission times, Mission San Pedro de Mocama on Cumberland Island (Georgia) was the seat of power among the maritime Timucua villages, including those in the Jacksonville area.  By the early 1600s, Spanish officials frequently referred to the coastal area from the mouth of the St. Johns River north to south St. Simons Island (Georgia) as San Pedro or Mocama.  At this time, the word Timucua was used specifically to refer to the inland area (and groups) from around Gainesville to the Suwannee River and north into southern interior Georgia.  So while the natives of northeastern Florida were Timucua speakers, their specific dialect was Mocama (a native word).

So what should we call the natives of Jacksonville?  In truth, there is no correct answer.  Timucua is valid but refers to a large number of natives—perhaps as many as 200,000 at the time of European arrival—who occupied a very broad area (more than 19,000 square miles).  The name Mocama is more specific and appears to better approximate the reality of their daily lives.  If our goal is to set the natives of Jacksonville apart from other Florida Indians, it is best to refer to them as the Mocama Indians.